Another driver is already on the track

Another driver is already on the track.

That’s what the game says and won’t let you race. But there’s no one here! What the hell?

It’s been nine hours and Rollercoaster is still not working. Has anyone succeeded in starting the race?

I have a feeling someone else has the mission active and hasn’t done the mission meaning no one else can take it. Though that’s just my initial thought I could be wrong

I think so, too. But why the hell should my mission depend on someone else? I mean, they have a similar race mission and it doesn’t have that problem.

it is annoying i have to admit, as i really want that screecher candy xD I’m wondering if there is a way to add a time out after collecting the mission, like if you don’t start it within 5 mins the mission times out. as to whether its possible to have multiple race timers going im not sure, im not sure how the strider race mission is set out, but then thats a one time race whereas this is a repeatable one

Of course, there is a way to add a timer for mission duration. As an example: the tempo-missions on planet Cyrene, which have existed for as long as I can remember.

But is there really a need to limit the race to one racer? I see no such need. Just like I don’t see the need to limit the sale of blueprints at the clothing store to one blueprint at 20 hours. I have to ask friends to buy blueprints for me. Why make it so difficult for us? If they wanted to reduce the rate at which blueprints hit the market, they didn’t achieve that goal, but they did add a bit of negativity to the planet. 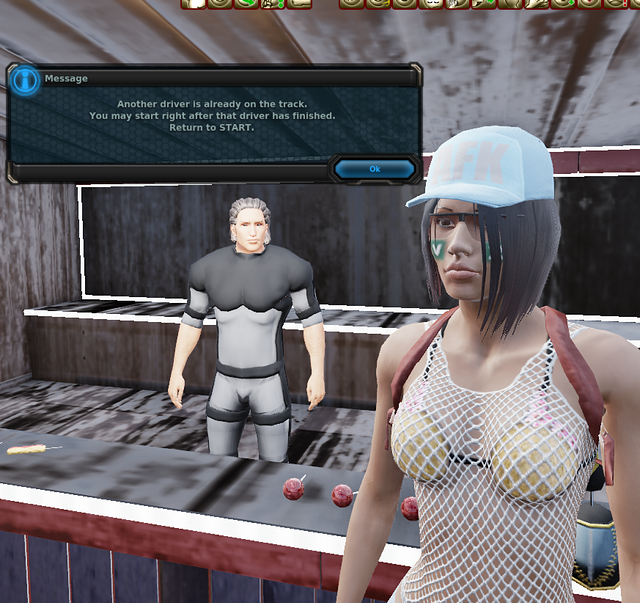 To be honest, I don’t know how the races on Arkadia are set up atm, so for now, this it how it is.
However, if no one is is on the track, then it’s a bug and that is something we can fix, if it’s gets stuck like that. IN the future however, we might get better races working.
But when things art bugging out, do contact us and we’ll do our best to fix it. =)

Honestly, racing on Arkadia is poorly organized. The racing is just not there.

Working for me after the update just fine. I finish with 2-3 seconds worth of time and have a blast using my skills from iracing to cut the corners just right lol

I don’t want to open another topic. Especially since my questions is somewhat related to roller coasters. So, with your permission, I will post it here.

If you or anyone else is interested we, players who complete it in time, can teach you how to complete in time. Or if you really wanna know ask luckycro, who has a crappy internet connection and plays from a laptop that is not good for gaming, and finishes 2 seconds faster than me.
As far as vehicle speed. Vehicles in game has a rubber band effect when they exceed their rated speed. With the amount of downhills in the race if rated speed was equal to actual speed we would bounce around all the time making us hate the car. A vehicle in game may meet, not-meet or exceed their speed based on power, ground etc. So a vehicle speed is an indication of its max allowed speed not its actual resulting speed. This has been tested by may of us who regular hosts races or takes part in races.

This is only an opinion/complaint from you. The blueprints are limited thus giving you max possible success. Making them a reward for a mission you can only do once a day (aka multi faction mission) is the same as allowing you to buy 5 clicks once a day.

So your mission, should you choose to accept it, is to obtain the required tickets to buy the bp’s.
This message will self destruct in 5 seconds. Best of luck to the Mission Impossible team. (If you do not understand the reference try watching Mission Impossible)

Another driver is already on the track.

That’s what the game says and won’t let you race. But there’s no one here! What the hell?

This original topic has now been resolved, as the mission will time out if you don’t start it straight away. I believe this topic should be archived and for further issues you should open a new topic.

As for what Night is talking about, I have some objections.